Bridge Kitchenware Corporation is a small, second generation, family-owned business which opened its virtual doors in New York City in 1946.  I use the term virtual because my father, the late-Fred Bridge, had a storage facility down in the Bowery District of Manhattan and used a delivery truck to meet with and sell to restaurants and hotels.  He later opened a small store on Third Avenue and 33rd Street.  Fred met my mother, Carolyn, in his own store in the 1960s when she came to buy merchandise for Betty Crocker.  She was a prominent food stylist.  She also had worked in the store before retiring.  My parents mentored me and my brother, Christoffer, at a young age.  Father and sons worked side-by-side over the years--starting with sweeping the floors, unpacking boxes, crossing out old prices, etc.  When I was really little my father taught me how to count by playing with the money in the register.  I took my first buying trip with my father at age 15.  We visited manufacturers all over the country-side of Europe.

We later moved to a larger location at 212 East 52nd Street, and then just next store to 214 East 52nd Street where we remained for 23 years until the owners sold the building.  For a brief time period my father and Pierre Parisot opened a second store in Chicago on Grand Avenue.  In June 2005, what seemed to be THE hottest days of the year, we moved to 711 Third Avenue (entry on 45th Street).  Before we moved the store we started moving our warehouse.  We discovered many of my father's "diamonds in the rough" -- those items he loved, bought, and never wanted to part with.  One of our favorite finds is the antique chocolate molds, most made of tinned steel and some made of stainless steel.

In July 2008 I said goodbye to New York City and made a move for a better quality of life for my family.  I moved for a short period of time into a warehouse in East Hanover, then down the street to 563 Eagle Rock Avenue in Roseland, New Jersey.  Unfortunately, I haven't had good luck with our locations since we were on 52nd Street because and have moved so many times since! I feel like a professional mover!  The Roseland building is being leveled for the gas pipeline expansion.  In mid-September 2011 I opened a small retail store in Madison, New Jersey, while I unpacked our new warehouse in East Hanover.  The Madison location is now closed because I opened our retail store within our warehouse. In October of 2018, I closed our East Hanover location, but remain an online kitchenware retailer.

I left Manhattan after 60+ successful years for a better life for our family.  I have been fortunate that our customers continue to support Bridge Kitchenware since I made this life-choice.  New Yorkers (and everyone else outside of New Jersey) continue to order on-line.  I have had many visitors from New York driving to see me in New Jersey, as well as far as Texas, Tennessee, Oregon, Illinois and Canada!  Also I have shipped all over the world, including Alaska, Philippines, Guana Island, Australia, China and more!

(Below: Steven Bridge and his father Fred Bridge)

Fred began his career at Nathan Strauss Duparquet working for James Shaw selling to prestigious hotels, restaurants, spectacular homes, chalets and yachts of the famous 400.  During World War II, Fred was a cook, baker, and chef for the 45th Infantry in Italy.  He started Bridge Co. with his mustering out money (changing to Bridge Kitchenware’s Corp. in the 1970s).  He made many contacts in Europe, and pioneered the import of European cookware, which changed the industry.  In the mid-60's he started to offer the same quality to the home chefs.  Fred was a legend, being described in the media as everything from the founder of the industry, to a curmudgeon, to the crabbiest  New Yorker, but no matter how you described him - Fred was the King of Pots & Pans!  His knowledge was astounding, and he was connected with celebrity chefs, professional chefs and writers, and industry leaders.  Danny Kaye, Lady Bird Johnson, Julia Child, Jacques Pepin, Rudolph Stanish, Maida Heatter, and Craig Claiborne cemented Bridge's success with frequent store visits, television invitations, and write-ups in The New York Times--our standards were set.  They became our friends and customers.  Continuing in the store, there is still the excitement of the retail customer standing side-by-side with the professional chef exchanging ideas about equipment and solving those annoying cooking challenges.

Bridge Kitchenware has received numerous awards over the years from Zagat Surveyors as being the "best kitchenware store in the City."  The 2006 Zagat Survey wrote, "Chef's haven has now officially relocated to East 45th Street assert acolytes who swear that in addition to the basics, anything and everything you could ever want for your kitchen is here, including odd gadgets, hard-to-find, quality cookware and other common things."  In 2008 edition Zagat  wrote, "This long-lived East Side "Aladdin's cave of culinary wonders" stocks an "intelligent", if "overwhelming", array of "chef-quality" cookware, appliances, barware and pastry equipment (supporters swear: "if they don't have it, it doesn't exist"); it's a "connoisseur's paradise" in spite of sometimes "crotchety" service and prices that can be a "bit high", and even if "it's not the prettiest store", it still "outclasses others by a mile." 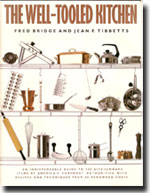 Fred co-authored The Well Tooled Kitchen (1991; William Morrow and Company, Inc.).  In the book Fred stated, "When asked to describe myself and my contributions to the kitchenware industry in this country, I like to say that I'm its father and have very proudly nurtured its growth..."  He loved to teach people about the products.  My father and I have created many products over the last 60 years that are common in today's kitchens, and many manufacturers have sought out our opinions on new products.  Fred designed the first-ever manufactured pie weights.  He also, along with Wusthof Trident, designed the heavy/wide cooks/chef's knife.  Other items we have designed are the black steel omelet pan (made famous by Julia Child), Sitram's 11 inch Catering saute pan with extra handle, the heavy-weight Vollrath's cookie sheet,  etc.  To this day customers come to the store saying Fred sold them an item more than 30 years ago and they still use it.  Keeping in Fred's tradition of training the customer, staff at Bridge Kitchenware are very knowledgeable.

As much as my father loved his customers, he was notorious for throwing people out of his store.  A friend recalls a favorite story Fred told her, "A famous anchorman tried to buy several thousand dollars worth of copper pots.  As the salesperson was writing up his order I asked him what he was planning to do with them.  He said he just bought a vacation house on Long Island that had a perfect wall for the pots to hang as decorations.  I kicked him out of the store!  My pots won't just hang on a wall.  I told him when he knew how to use them he could come back and buy them."  People still tell me how they would sneak back in on another day.  One customer told us a story of when her grandmother first took her to our store.  Before they entered the store her grandmother grabbed her by her arm and said buy whatever Mr. Bridge recommends, he knows his stuff and NEVER argue with him, just nod and be quite and hand him your money.  Today many fourth-generation grandchildren come into our store with their great-grandparent who tell them what to buy.  We often hear them say Mr. Bridge said to buy this, and I still use this pot today and it looks brand new.

Be sure to login as a user and click on Email Newsletter as we are encouraging you to utilize our website in order to track your previous purchases and receive our SALE announcements.  You'll also be alerted to special sales.

For 72 years we have been blessed with and enjoyed serving the very top hotels, restaurant industry personnel and home chefs alike.  We will continue to do so with more customer service, fair pricing and the highest in European and domestic quality.  We welcome you by phone, web and email  Thank you for browsing our website!  Please share our website with your family and friends.  Come back often as we are adding new products.